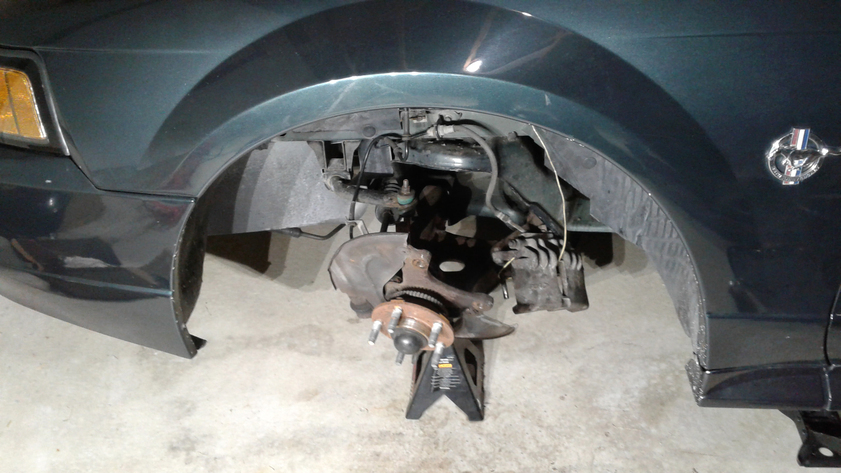 Sixty degrees, clouds, and stuck in a garage

My pride and joy sits on jack stands awaiting replacement parts from Eibach.

If you didn't get a chance to read about how my Mustang broke, the short story is that the strut shaft (which comes up through the strut tower) sheared off as I was performing a Y-turn in my girlfriend's driveway on Easter weekend.  Talk about bad luck.
It wasn't actually a factory part that broke - I replaced the suspension with Eibach coilovers last summer - but that doesn't exactly lessen the blow.  (It actually increases it because I can't easily get a replacement part.)

What did lessen the blow was that I actually managed to avoid a tow back to my house.

Thanks to a genius hack that my girlfriend's dad performed on the part, I actually drove the car 30 miles back to my house without incident after we fixed the strut.

If you haven't figured it out, his idea was to weld the part back together.

I was initially skeptical of this idea because I thought the part might be aluminum.  But, as we discovered by sticking a magnet to the part, there was enough steel that he was able to weld it back together for me.

The weld turned out pretty doggone great looking, especially considering the minimal tools he had available at midnight on Easter.

Have a look for yourself (red arrow indicates where it was welded back together):

All things considered, this was a pretty epic fix considering that strut shaft actually sheared completely off.

And it got the car home in one piece.  And on Easter, that was truly all that mattered to me.

But I'm not crazy.

As much as I trust this awesome weld job to hold things together, there's no way this piece is square.

Getting camber and caster back where it should be would be almost impossible.  And, this piece is probably defective to begin with considering it snapped on me making a parking lot maneuver at a land-speed -record-breaking  2 miles per hour.  (Thankful it happened at 2 mph and not 70mph though.)

So I am in talks with Eibach about replacing the part under warranty.

After some initial frustration getting through a complicated phone system, Eibach has been pretty great to me through the process so far.

This much I do know though.  The helper spring is really messed up:

Just look at how cocked sideways that is!

I have no idea whether that happened before or after the failure , but either way I'll need a new one of those too.

Until next time, folks.  That's the update for now.