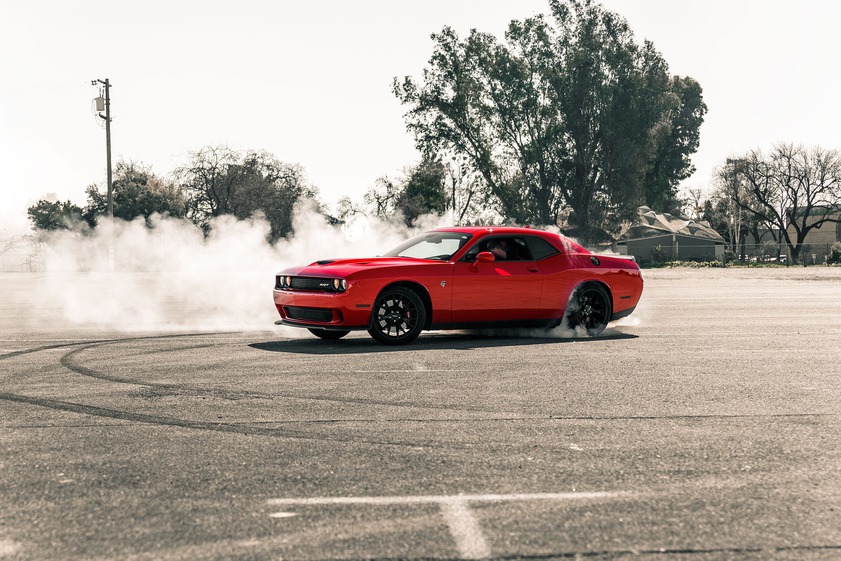 How to stop crashes at Cars & Coffee

One bad apple can ruin the whole bushel

Recently, Houston Cars & Coffee made a post on Instagram calling out and condemning some unruly folks who did unscrupulous things like burnouts and reckless driving at a recent event.

I think it's best if you read it straight from Scuderia's message on Instagram, which is posted in full below: 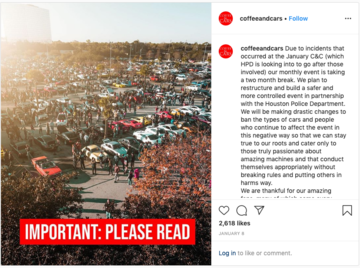 Due to incidents that occurred at the January C&C (which HPD is looking into to go after those involved) our monthly event is taking a two month break. We plan to restructure and build a safer and more controlled event in partnership with the Houston Police Department. We will be making drastic changes to ban the types of cars and people who continue to affect the event in this negative way so that we can stay true to our roots and cater only to those truly passionate about amazing machines and that conduct themselves appropriately without breaking rules and putting others in harms way.

We are thankful for our amazing fans, many of which come every month and even travel from around the country and internationally.
Safety is always our number one concern and we’ve been very outspoken about our tolerance for crude behavior, burnouts, and crowds promoting reckless driving during the event and from the side-lines. It is unfortunate that these careless individuals who’ve disregarded the rules and promoted the act and encouragement of these behaviors from the side-lines have ruined C&C for everyone.

C&C condemns these individuals and their actions because they endanger attendees, participants, and other drivers part of the event or not. This is something we, Memorial City Mall, The City of Houston, and the Houston Police Department have zero tolerance for.

We will be in touch with updates as they arise but rest assured that C&C will never be cancelled. We remain passionate in our pursuit of celebrating these incredible machines and about helping Houston's kids in need. This long-time Houston event unites car enthusiasts and unique machines that weren't previously publicly accessible. Our mission has always been to benefit under-served children of Houston.

The C&C team is an all volunteer staff who are dedicated to continuing what has become a Houston tradition for all ages. The event has always been open and free to the public and we strive to keep this aspect alive. Memorial City Mall and Houston Police Department have been tremendous long-term partners. We will keep fans updated and look forward to a greater C&C soon.

Thanks for your continued support!
-Scuderia

While there have been many solutions proposed for how to curb this kind of behavior - for instance, limiting the crowds lining the streets that encourage said behavior - I have yet to see anything of substance that is likely to deter the actual offenders from engaging in the reckless behavior to begin with.

But maybe we are approaching a solution in the wrong way.

Maybe we need to look at this differently.

Maybe telling certain people not to do something is actually encouraging them to do exactly what you don't want them to do.

The Best Defense is a Strong Offense

Thus, rather than trying to deter this sort of behavior from happening by implementing suggestions like removing the encouraging fans from lining the streets for burnouts, I have a much more elegant solution.

Yes, I prefer the shame method for people who end up curbing their car or otherwise wrecking in some unceremonious fashion.

But this isn't some kind of scarlet letter to wear.

The plan is pretty simple, but I believe it will be extremely effective.

Here it is: If you wreck your car, spin out, curb your car, or do something else stupid, the authorities that be have the power to enforce the following shameful punishment on you:

You seem skeptical, but can you imagine?

To get a taste of what enduring said punishment would be like, stare at this photo of a particularly stupendous J-Body while watching the embedded music video below:

Yes - if you aren't feeling great now, I have no idea why.

I mean, doesn't driving a J-Body, top down, blaring mullet-era music from a man who once drove a Pontiac that was actually cool sound great?

Are you kidding me?

Of course not!  It sounds terrible.

And I'm sure my idea to inflict this punishment on offenders has nothing to do with the fact that I had the pleasure of driving one of these J-Body masterpieces of engineering during my Driver's Ed training in high school.

Nope.  That has nothing to do with it.

Following in the Footsteps

As effective as this punishment alone is to deter people from the displays of burnouts and so on, there are additional benefits that might not be immediately obvious without a closer analysis.

You see, much like more brutal forms of Capital Punishment in bygone eras, this particular punishment will nevertheless follow with one similarity to those barbaric punishments.

That is: it will serve as a reminder to others in the car community of what their fate will be should they ... ahem, go there.  Yes, there.

Why it might not work (but probably still will)

After coming up with this plan, it did nevertheless occur to me that there might actually be people who like J-Bodies.

After all, just because you don't think people can like a car as nasty as the J-Body abomination you experienced in high school (or maybe it's just me?), there were still plenty of Reliant Robin fans fired up when Jeremy Clarkson ripped on Reliant Robins in the most hilarious way possible.

I present to you: the J-Body Organization.

After discovering this was actually a real group, I initially thought that I might come up with an alternative punishment for "J-Body enthusiasts."

But I've since decided against it.

For one simple reason:

Anything I could come up with is not sufficiently worse than what they're already enduring as fans.

So there you have it, a fool proof plan to stop Cars & Coffee crashes in their tracks.

Better yet?  I don't even demand credit for saving Cars & Coffee.

(Just some reassurance I will never have to drive one of those J-Body turds again - is that too much to ask?)