What could be a more American pairing?

Let's face it: whether we like it or not, a lot of newer vehicles audibly "talk" to us in some way.

This is hardly surprisingly to most enthusiasts, but the enthusiast community as a  whole is quite fractured on whether we like actually like this tech in our cars or not.

Personally, I really enjoy tech on my daily driver.  In fact, one of my favorite features of my commuter vehicle, a 2010 Ford Fusion SEL, is that it features the "talk to me" SYNC system.  It not only talks to me, but it also is capable of performing requests based upon voice recognition software.

Whether I want it to read a text off my phone, call someone by saying their name, or summon Bluetooth audio stream from a media device, all of this hands-free technology is pretty useful while cruising down the highway.

And all of this technology is pretty new-fangled and awesome.  Especially the voice-recognition technology as it relates to its use in an automobile.

But, the more I thought about it ... talking cars aren't really new.

And I guess we can't really talk about talking cars without talking a little about the man who made talking cars famous back in the 1980s: the Hoff himself, David Hasselhoff.

How can we talk about talking cars without conjuring up images of K.I.T.T. from Knight Rider?   After all, what talking car left a bigger imprint on the psyche of children and adults alike in the mid-80s?

And if all this talking about talking cars whilst using the word talking over and over again is making you feel a bit tongue tied, talked-out, and exasperated, just wait.

Because I'm about to look at something rationally.  And that'll probably annoy you even further.

Because looking back at the series rationally (yeah - I know - you're not supposed to do that), we know that most of what we saw was smoke and mirrors.

I'm sure that the Knight Rider historians amongst us will correct me on anything I'm wrong on, but to the best of my understanding, here are a few of those smoke and mirror elements:

Reading beyond this point may ruin your childhood and/or cause severe emotional distress.  But I still recommend it.

#1 K.I.T.T. didn't really drive itself.   (Reality: There were various ways that a stunt driver drove the car - the driver was just hidden - sort of.) 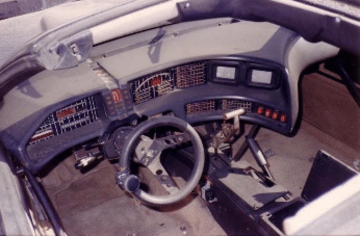 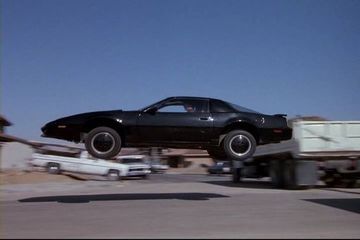 #3 K.I.T.T. couldn't really  talk or make decisions on his own (but if you have a Knight 2000 microprocessor with advanced cybernetic logic module, please send my way).  (Reality: It was William Daniels' voice you were hearing - yes, FEEEEEENEH! - not the car itself.)

In spite of all these tricks though, I've always thought that the idea of a car that interacts with us is quite appealing.

But then I had an even weirder revelation about all of this:

Many of the smoke and mirrors elements of Knight Rider actually came true!

Just hear me out.

I mean, consider these things ... we now have:


And while I must confess that we probably won't ever see too many cars roll off the lot capable of the epic jumps that K.I.T.T. performed (I guess the Ford Raptor is about the closest we'll come - but even that has its limits), way back in 1983 - yes, when Knight Rider was being filmed - there was actually a car company that not only had a talking car, but it was on affordable platform that anyone could purchase.

But it wasn't a GM, and to the best of my knowledge, the Hoff never drove one on TV.  (But I'd love it if someone could prove me wrong. )

So what we're looking for is a 1980s car that actually talked in real life and David Hasselhoff never drove.

And where does that lead us?

Well, somewhat surprisingly, the answer is ... the Chrysler K-car.

Disappointed?  You shouldn't be.  What were you hoping for?  A Delorean?

You see, in 1983, Chrysler debuted the Electronic Voice Alert system on the Chrysler K-car platform.

And unlike our childhood favorite, K.I.T.T. - which was actually Mr. Feeny voiceovers recorded in a studio - the system actually responded with a voice that reacted to actual conditions happening to your Chrysler vehicle.

So, in other words, if your engine oil pressure was low, the car told you.

If your lights were left on, the car told you.

If your mom wasn't buckled in (unlikely - I admit), the car told you.

How did it work?

So if the system was somewhere between an abacus and the HAL 9000, what exactly made the Voice Alert System work?

Well, the system was essentially a speech synthesizer that reacted to signals sent to it by the car's onboard computer.

To be more specific, the system utilized a PMOS (P-type Metal Oxide Semiconductor) ROM (Read Only Memory) created by Texas Instruments and was very similar to the one used in the childhood toy called the Speak & Spell.  The early versions of the system featured 11 different spoken warning messages.  Later versions allowed up to 24.

So why am I prattling on about all this?

Well, the answer is simple: I'm not only a car enthusiast, but I'm also a huge computer and electronics geek.

What's awesome about this is that I know I'm not the only one in this position.  In addition to all of my friends who also share my love for cars and anything electronic, I recently stumbled across this video of a bloke who is working to preserve the ROM chip from a salvaged 1980s Chrysler vehicle that featured the Electronic Voice Alert system.

And, that my friends, was the impetus for this long-winded blog article.

So check it out in the video frame below.

Oh!  And make sure to watch the whole thing - because at the end, you'll see that Chrysler could have been Daft Punk back in the 1980s already.

And I'm not kidding.

So, what about you all?

Do any of you remember the Chrysler Voice Alert system?

What feature would you most like to see in a production car that was featured in Knight Rider?
Or ... what you really want to comment on ... what am I wrong about when it comes to Knight Rider?