Of Mice and Men (and Volkswagens)

The Jetta has a mouse problem, and you won't believe what's to blame!

There I was, minding my own business at a stoplight on the east side of Madison, Wisconsin.  I was growing impatient for the endless light to change.

My impatience wasn't surprising though.  What was surprising  was what I saw.

Out of the corner of my eye, I spotted something.

Mere inches away from me, looking at me directly with beady little eyes, perched on top of the bottom left corner of the windshield, directly above the cowl, was a miniature hitchhiker.  No - not a vagabond looking for a ride to Iowa City.

Creepier yet: a living, breathing rodent.  A brown mouse.

Is this Real Life?

Frankly, I did a double take.  I was in disbelief.  Did a mouse really just pop out of the hood of the car?  I mean, frankly, I've been quite stressed and busy with work lately.  Thus, I initially questioned whether I was hallucinating or something.

At the next stoplight, when the mouse skittered across the windshield, only to retreat beneath the cowl once again, that was all I needed to confirm this absurd comedy playing out right before my eyes.

This was Real Life.

In fact, I even snapped a picture after I parked the car ... you can just see part of the mouse's ear and body in the gap between the hood and the cowl area: 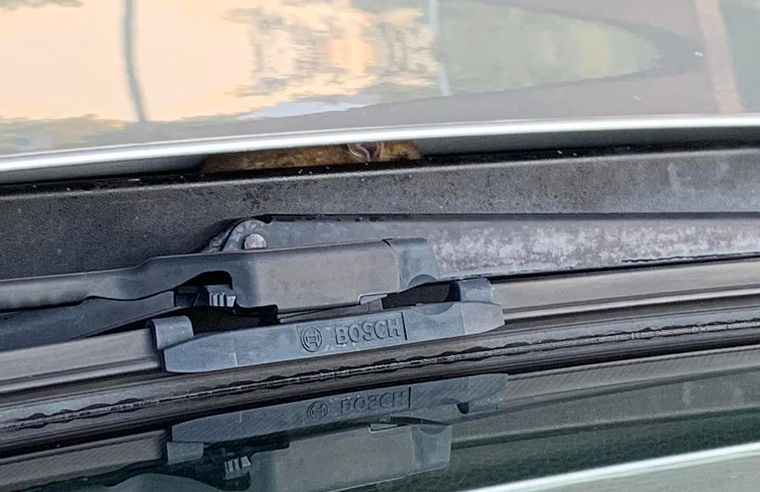 Yet, even with photo evidence, there were still unanswered questions.

For instance: how exactly can a mouse sit in the engine bay at speeds around 70 miles per hour?  Moreover, where the heck did this little guy go after I snapped this photo?

To be honest: I still don't exactly know.  What I do know, however, is that this is not unprecedented.

What's incredibly strange to me is that I'm not the first Jetta driver to experience a mouse popping out of the engine bay - at speed even.  You see, a while back, Justin Hughes wrote about a similar experience with the Jetta Ute he built.

It seemed like a weird coincidence that this happened to two Jetta owners.

Two Jetta owners with blogs even.

So I began wondering if there might be something about the Jetta - or maybe Volkswagens more broadly -  that mice are attracted to.

So ... what is it about Volkswagens that make them so alluring to mice?  It it the precise German over-engineering?  The appealing hard-creased body lines?

Well,  to be fair, mice are well known to be tasteful and classy.  Just look at Chuck E. Cheese.  All formal and such with that middle initial in there.

But maybe it wasn't even a classy mouse taste we were dealing with here.  Maybe - just maybe - it was something simpler.

Insulation from the Truth

One of the answers to why the mouse chose our car might simply be the material that was chosen to insulate the wiring on our Volkswagen.  Although I truly hope this is not the reason, a bit of research on this problem revealed that there are many anecdotal accounts of mice preferring cars with the soy-based wiring.

In fact, The Drive reported on this phenomenon of mice chewing on soy-based wiring insulation back in May of 2018.

I also found evidence that there is a class action complaint forming against Volkswagen AG over electrical issues on vehicles.   Several people are chiming in with similar stories.

What's your take on this?  Do you think mice really chew on cars with soy-based insulation at higher rates than other cars?   Have you had this experience (or something similar)?