This and many other self-evident truths you already knew yet choose to ignore.

It's a simple question:

And the answer seems so blatantly obvious:

Of course it is!

So, if this meta question is so simple - what's the rub, you ask?

Well, the rub is this:  Although many automotive enthusiasts intellectually understand the principle of "your car is your car," in the land of the Internet, this isn't exactly the standard that we abide by all that often.

In fact, there seems to be a growing social movement that although "your car is your car," somehow your car is also under the protective vigilance of the communities you visit, the blogs you read, and the users you interact with.  And this doesn't seem like a particularly healthy trend.

Let me give you some examples of how this can escalate in many forms ...

But why don't you see how nice they are if you decide to personalize your Canyonero by adding eyelashes to your headlights? 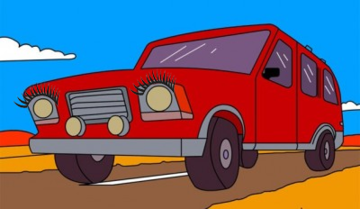 Oh, look!  He's bringing you a party favor.  (I guess you should have told him you got the F-Series like Homer.)

Yes, cool bloke indeed.  Until you let him know that you've decided to put a Chevy Beretta grille on your 1988 Oldsmobile Cutlass Calais.  You send him the pic:

And now ... he's going to full-on comment-shame on you!  On YouTube!

Because that grille is sacrilege and he won't have THAT on a vintage  OLDSMOBILE!

Or what about Jalopnik user JeepinAintCreepinJustCrawlin4x4?

How will they react when they hear about your 1987 Jeep Wrangler on 21s, pictured below? 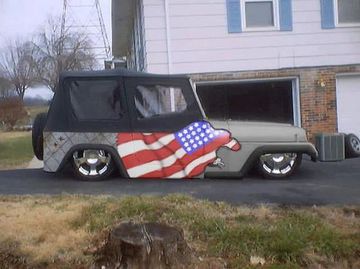 Well, JeepinAintCreepinJustCrawlin4x4 impolitely informs you what kind of mother reared you and what flavor of lead paint you snacked on during said rearing.


Look, fellow enthusiasts, all kidding aside: I get it.  We're passionate about vehicles, and we all have opinions about what should be done and what shouldn't be done to a number of different vehicles out there.

We might even not-so tacitly hold to some standard that elevates certain hunks of metal to a higher standard than others - and to some extent, that makes sense.

If vehicles are extremely rare AND historically significant, we might want to preserve at least a few of them in stock form so future generations can see them and enjoy them.

But what I don't understand in this Internet shame culture is situations like the one Matt Farah recently encountered with his newly purchased 1987 Porsche 911 Carrera.

In case you've been living under a pile of tires (plausible, given my audience, I realize), Matt Farah has decided to turn the '87 911 into a Keen Project Safari Build.  Before I say anymore, remember: this is HIS car.   He bought it.  He paid for it.

Yet, his decision to turn it into a Safari Build has literally ENRAGED many in the Porsche community - some to the point of offering him money for the vehicle to "save it."  (I'm not kidding.)  Many presumed he should have used a "beater" car.  And don't even get me started on the YouTube peanut gallery's opinion of what Matt wants to do.

Yet, what Matt is doing here doesn't seem egregious in the slightest because first and foremost, the car isn't even rare - in any sense of the word.

But just to be clear: you are entitled to your opinion of whether Matt should do this to his car.

In fact, you are entitled to your opinion of what should be done to any car.

Remember your answer to my opening question?

Of course it is!

Let's not complicate things, folks.  Porsche or not, these vehicles are metal objects that we are meant to enjoy.

This is Matt's car.  Matt does awesome things by sharing his drives with us.

OneTake is already nearing the end.  Don't make Matt Farah hate us all before he moves on to his next project.

Speaking of which, why don't you watch his video below?  And maybe - oh, I don't know - consider acting like a decent human being in the comments section for once?