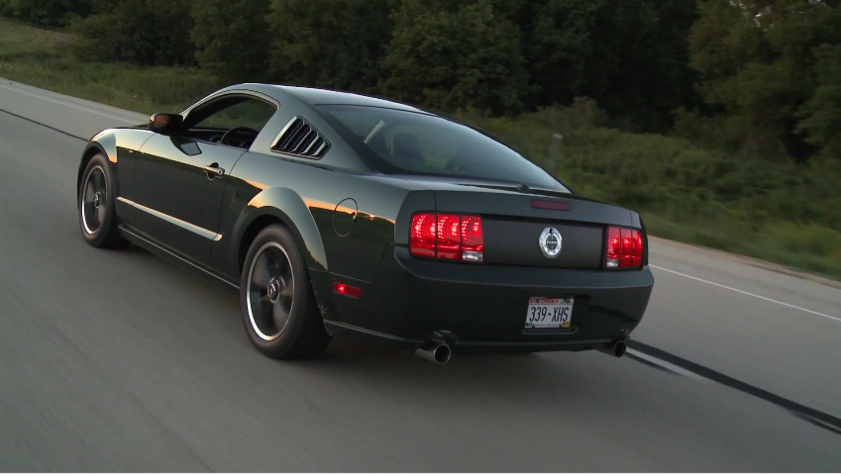 Come along for the ride in a 2008 Ford Mustang Bullitt on this tribute film created by Don Ford.

When I was a kid, I used to play cops and robbers with my twin brother on our bicycles during the summer.

We'd ride around the neighborhood, chasing each other, making siren and engine noises that we thought mimicked the best police chases on television.  We had a blast doing this, and I think it was the thrill of the chase that kept us coming back to this childhood game.

While I (thankfully) no longer chase my brother on a bicycle, the thrill of a good chase never really left me.  It may have even heightened over the years - especially when I was a teenager and my dad introduced me to a movie called Bullitt.

Most car enthusiasts are familiar with the movie Bullitt, but on the off-chance you aren't:

Bullitt is a movie that came out in 1968 and features Steve McQueen as investigator Frank Bullitt, who drives a dark highland green 1968 Ford Mustang.  As the movie progresses, the climactic scene for car enthusiasts approaches.  It's at this point that McQueen - as in the real Steve McQueen did the stunts himself - barrels around the hilly streets of San Francisco chasing the bad guys.

And there are jumps, blip-shifts, roaring V8s, squealing tires, close shaves, and, yes, even cringe-worthy body contact.  The combination of awesome cars, Steve McQueen, and an amazing chase means I must have watched that scene hundreds of times over the past decade.  Considering I was already obsessed with Mustangs, this movie only amplified that.

I wanted to be Steve McQueen.

Or at least drive his car.  And, unsurprisingly, I'm not the only one.

In the series' maiden voyage, Don Ford takes us on a journey explaining the story behind his Ford Mustang Bullitt.

I won't spoil the story for you though.  So without further ado, please view the film!

And you can plan on another one of Don's video being posted as soon as he channels his inner Frank Bullitt once more and pulls the trigger once again.

From the Ford Performance website:
"Shortly after the all-new 2005 Mustang was launched, talk of reintroducing a Bullitt edition was rampant among Mustang enthusiasts. With the sheet metal atop the new S-197 platform so closely mirroring the classic 1968 Mustang shape, it's no wonder that so many people were excited when Ford unveiled the Bullitt edition Mustang GT for 2008.

Engineers tapped Ford Racing for a host of upgrades to make the new Bullitt much more than just an appearance package. Ford Racing’s Power Upgrade Package added 15 extra horsepower to the Mustang GT’s 300 ponies. Suspension tweaks included stiffer shocks, springs, and a strut tower brace, giving the Bullitt extra bite in the corners. Bullitt-specific front brake pads and 3.73 rear gears rounded out the mechanical upgrades, save for a true dual-exhaust system that was specifically tuned to sound like Detective Frank Bullitt’s own 1968 Mustang movie car.

In keeping with the classic film, the 2008 Bullitt was stripped of badging, scoops and spoilers, with the faux gas cap on the trunk bearing the only name of the beast. A unique grille and specially crafted 18-inch wheels finished the exterior treatments, while Bullitt-specific interior trim with Bullitt badging and an aluminum shift knob completed the Bullitt transformation. Each 2008 Bullitt was assigned its own VIN-specific serial number on a special ID plate affixed to the car's strut tower brace.

Available in either Dark Highland Green (specific to the Bullitt) or simply Black, the 2008 Mustang Bullitt is a thoroughly modern take on the original movie car legend."

I purchased my 2008 Ford Mustang Bullitt, used, from a small dealer in Palatine Illinois on Feb 11 2016. This date was significant because it was exactly a year to the day that my father had passed away. My Dad was getting older and wanted to find a fast car to help make retiring from his motorcycling days a little easier. Unfortunately we didn't get to make that happen, but a year later I decided to take my fathers advice and pull the trigger on my own dream, a 2008 Ford Mustang Bullitt, build #0890. It had 79k on it and five previous owners, but was a very clean car and the price was right. The car was a stock Bullitt except for the California special front fascia and the side window louvers which really look great on the Bullitt. During my first summer with it I installed the Ford Racing adjustable handling package and the Ford Racing FR500S axle back exhaust. Both have been wonderful modifications. The car sits an inch lower and carves up the corners with precision, all while making an absolutely fantastic symphony of angry V8 noises. It truly is a Dream Machine for me and it does nothing but make me smile from ear to ear.