High temperatures, class, and yes - even a few Lucas jokes

Most years, I try to attend with my dad.  However, this year was a special treat because my father-in-law also attended.  It was a great time to spend with both fathers!  Although this year's event was great, I couldn't help but think back to the first event I attended and why I attended in the first place.

I think the real impetus to attending in the past is because my biological father wanted to see what a British car show was like following his sudden interest in British luxury.  It wasn't always that way - but when I was a Junior in high school, my dad suddenly decided to take a risk and dip his toes into the lamb's wool of British luxury.

He did this by purchasing a used 1996 Jaguar XJ6 with a Jaguar's famously smooth 4.0L inline 6 cylinder motor.  (The actual car is pictured to the right.)

I still remember that day: the car arrived by car carrier from Virginia.  I remember being excited and nervous when the truck pulled up because we weren't sure whether the car was a good idea or a terrible mistake.  It's no secret that British vehicles didn't exactly have a stellar reliability record.  In practice, they've been good at

times and bad at times.  But regardless of their reliability, Jaguars have actually become something my family loves - you might even call it a defining characteristic of my family at this point.

You see, ever since that first 1996 Jaguar was purchased about 15 years ago, both of my parents have been bitten by the Jaguar bug - that's the only brand they have purchased since.  My mother currently drives a 2007 Jaguar XJ8 Vanden Plas (see above) and my father recently upgraded his Jaguar to the amazing newest generation with a 2012 Jaguar XJ8 (which I do not have a photo of yet). 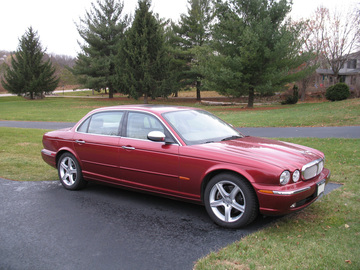 Even my brother caught the bug - he owns a 2005 Jaguar XJ8 Vanden Plas (see right), which he purchased while he was in college!

Surprisingly, on the used market, these cars aren't as expensive as they look.  And that's part of the fun.  They feel a bit like a secret.

How was Field Day?

Every year when I attend British Car Field Day, the thing that strikes me the most is that British cars definitely have a delicacy and refined style to them that American cars lack.  I love American cars for their brashness and some of them are downright beautiful in their own right.  But you can see a definite philosophy difference that the Brits had when designing and styling their vehicles for British tastes.  There's an elegance that you don't see - even in American luxury cars. 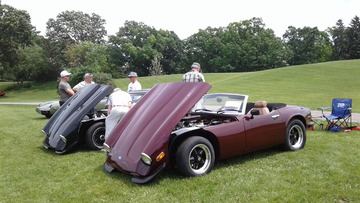 At the event, one of the great things I've noticed about most of the attendees who brought their cars is that they don't take themselves too seriously.  One example was a gentleman I spoke with owned a TVR with a Ford V8 up front.  That car looked great, and I'm sure it's a riot to drive with all that torque.

What struck me about the gentleman though was not only his conversation but also his t-shirt, which poked fun of the fatal flaw most British car owners deal with: Lucas electronics.  A tell-tale sign that an automotive enthusiast is having fun is that he isn't offended by his own vehicle's flaws.  This man clearly embraced them.

So, as a fellow British car fan, let's get the jokes out of the way now:

If you didn't understand why these are funny - you've obviously never driven a car with Lucas!